The player’s guide for the Dungeons & Dragons version of a Middle-Earth role-playing game is perfect for a fan of Tolkien’s world. The designers basically nail the atmosphere and feel of the setting and demonstrate that the D&D 5ed. rules can be reworked to fit a very different style of play.

Adventures in Middle-Earth is very true to the original material and is therefore a very low magic game. There are no spell-casting classes and the abilities the players do have can be heroic, but the magic in them are always subtle – just like in Tolkien’s novels. 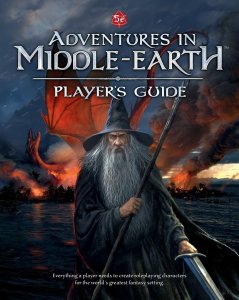 The game is published by Cubicle 7, who also makes the One Ring role-playing game, and Adventures in Middle-Earth is their D&D interpretation of that game. It is clear that the designers already have a deep understanding of the lore. All the classes, cultures and virtues are clearly grounded in the source material and the book is filled with relevant quotes from the books.

I was so inspired by this book that I began re-reading the Lord of the Rings (for I don’t know which time), and this is the first role-playing supplement that I’ve read cover to cover since D&D 3.5.

The setting focus on the 70-year period between the events of the Hobbit and the events in the Lord of the Rings. The default area for the game is the Wilderlands, which covers the area from the Misty Mountains in the west to Erebor in the East. The death of Smaug, the return of dwarves to the Lonely Mountain and the rise of Dale as a center of trade has created a cautious surge in optimism, and Bard of Dale calls for adventurers to help them rebuild the land.

The most significant mechanical innovation is the Journey system the game has and the game also features corruption of the character’s spirits through Shadow Points. That said, all the fundamental elements, such as class, races, feats and equipment have been re-worked to fit the setting. That creates – in totality – almost a different game entirely.

I look at some of the major features below.

Each player picks a culture instead of a race, such as Men of Bree, Men of Minas Tirith or Dwarves of the Lonely Mountain. All of the cultures are flavorful and has long lists of appropriate names. Mechanically they are similar to the races of the PhB, but with fewer fantastic abilities. They mainly provide stat increases and skills, and – importantly – define which virtues (feats) you can pick.

The two or three archetypes for each class also sets all the classes apart. These are closely molded to the Middle-Earth setting and blurs some classic distinctions. For example, the Warden has Counsellor, Herald and Bounder as archetypes, and they are part bard and part fighter, depending on which one you pick. What I love about them is how well they fit the setting. The Bounder for example, if you don’t know, is referenced in the Lord of the Rings, as the halflings that keep the Shire safe.

Mechanically, it is hard to judge, without playing the game, how well they are balanced.

In place of feats there are a number of virtues, and most of them are tied to the character’s culture. Thus, only wood elves can learn Wood-Elf magic – which gives you the “awesome” power to enchant an arrow, and, if you pick the virtue three times, make a victim fall asleep! I love how low magic that is. And again, they fit the setting perfectly.

A few of them seems to be a bit over-powered. For example, Bardings can pick Swordmaster. It says: when fighting with either a broad sword or long sword, add your proficiency bonus to your AC. I can’t see myself not picking that Virtue. Even if it added half your proficiency modifier, I would pick it. That indicates an imbalance… (P.S. and I’ve now noticed that one of the pre-generated characters has this Virtue, and he only gains +1 to AC, so perhaps they made an error in the write-up?)

The backgrounds have much more flavor, compared to the PhB, and again connects well with the setting. Examples include Doomed to Die (You know your life isn’t going to end well, but soldier on anyway), Loyal Servant (as a squire or gardener or close kin) or Hunted by the Shadow (the Shadow is constantly after you and your family, as you are renowned foes of the Enemy).

Equipment:
The equipment chapter is short, but mechanically relevant. All the armor and weapons are found in Tolkien’s world, so there are no great swords or plate mails on the list. Particularly, when it comes to AC, that can influence gameplay. Heavy mail provides the highest AC, which is 16. They’ve added Great Shields, which gives +4 to AC, which is probably to close that gap. On the “magic item” side, they don’t compare to the regular DMG. Cultural Heirlooms can be gained as a feat on level 4 and on. It could be a weapon, like the Dalish Longbow, that gives +1 to attack and damage, and +1d8 extra on a critical hit. On one hand, I like that player’s can add cultural heirlooms ‘off screen’ so to speak. But will they? And if they do spend a feat on an heirloom, how do they feel about another player finding something similar in a treasure hoard?

The most significant ‘new thing’ in the game, in my view, is a system for journeys. I won’t go into the detail of the rules, but whenever the group needs to travel to an adventure location, they need to use the journey rules, in place of the regular overland travel and random encounters described in D&D.

Each map area has a difficulty level (color coded), and the start of each journey the group pick characters for a number of roles: Guide, Scout, Hunter and Look-out. Embarkation dice are rolled and modifiers added, and depending on the roll and the land they travel through, they may have a number of Events. The events can be combat events or obstacles, but they can also be beneficial.

The tough part is, when the characters arrive at their destination, they roll an Arrival roll. If that goes badly, they might gain exhaustion levels or Shadow Points. Both are bad.

Furthermore, travel connects with the rest and healing rules of the setting. Long Rests can only be had in a Sanctuary – like the House of Elrond or Beorn’s home. Therefore any damage or exhaustion they acquire from encounters or bad luck may be hard to heal when you reach the destination.

The rules will add danger and flavor to the game, and they can be used in other campaigns with a little modification and work.  In my current regular D&D campaign, with 9-10th lvl characters, one random encounter should either be very dangerous or have a deeper purpose, such as providing clues, potential allies or add depth to the setting, because it won’t drain resources or make their lives significantly more challenging, as they are back to full power the next day, unless I want to spend several hours just running random encounters. I think this system solves that issue – you basically want to avoid wolves or orc raiding parties – because they can impact if you are able to succeed in your greater goal or quest.

Of course, it also adds a lot of flavor, and, as the group has no magical aid – like Purify Water, Good Berries or Leomund’s Tiny Hut – the journey will become something dangerous the group must consider closely.

The game has a system for gaining corruption. It can happen through sorrow, blighted places, misdeeds and tainted treasure. The results are negative psychological traits (Shadow Weakness) and ultimately a complete fall into Shadow. Boromir is the obvious example from the novels.

It is hard to judge how big a threat it is to the characters over a campaign. But I like the mechanic and, again, it feels right for the setting.

In accordance with the fiction, not everyone welcomes travelers from afar, and the game therefore has a system for Audiences with the various rulers of Middle-Earth. It is basically skill challenges modified by how various cultures see each other. Not everyone enjoys a system for a role-playing encounter, but I can see why it is included. It can certainly add drama and consequences, and again fits the game setting perfectly. In the published adventure Wilderland Adventures, the mechanic is used frequently – but more on that in a future review.

This down-time system also fits well with the setting. The assumption is that you adventure and travel in the spring and summer, maybe autumn, and settle down for the winter, perhaps to help bring the harvest home, to research ancient lore or to open a new Sanctuary. It is also a way to regain hit points and exhaustion levels, which might be sorely needed, given the trials that the characters can go through.

It is certainly a much more interesting down-system compared to the original D&D rules, but without a whole lot of clunky mechanics added.

Final Thoughts on Adventures in Middle-Earth:

I would love to run a campaign in this game and setting. It is very well done, and it feels like you can really play a Dúnedain ranger, a dour dwarf of the Blue Mountains or a hobbit off seeing the world and stride right into Tolkien’s pages.

I don’t think it is for everyone, though. It is probably the least magical fantasy setting I’ve encountered, certainly in D&D, unless you go for an actual historical or near-historical setting.

As a DM (or Lore Master I should say), my greatest concern is that I doubt the setting works well with characters above 7th level or so. I could be wrong, but I think making stories with fitting enemies and drama at level 8+ will be a challenge within the Middle-Earth setting – partly because the most epic plots have been told by Tolkien. But these concerns are for the review of the Loremaster’s Guide, which should arrive at my door soon… and perhaps the upcoming campaign: Mirkwood.

It can be hard to judge if the game is well balanced, and particularly how well the different classes and cultures compare to each other. Player’s really dislike if one class or character build outshines every other, and almost every group has a player who will spot those ‘killer combos’ in an instant. And as there is little or no enchanted equipment, except for heirloom items and good dwarven steel, the player’s AC and attack modifiers, will generally be lower, compared to standard D&D. It is hard to tell how they stack up against monsters?

Exhaustion can also be crippling and it is hard to remove. Are the journey rules too hard, if you don’t have characters built to be good at survival, perception and so on, or if they are plain unlucky?

Why should you buy this book?

Why shouldn’t you buy this book?

Back to top
Grumpy Wizard